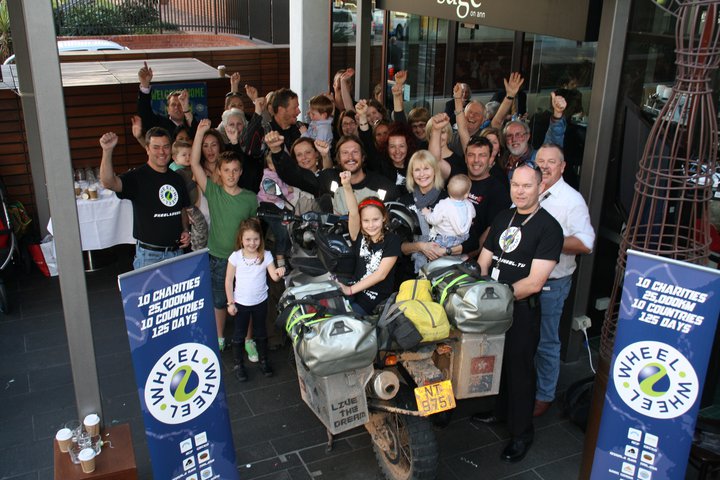 After packing away his corporate suit for some heavy duty expedition gear, Wheel2Wheel founder and solo rider, Morgan Parker has successfully completed the Wheel2Wheel transcontinental, charitable motorcycle expedition in his hometown of Brisbane on Monday, 4 July 2011 at 12 noon (Brisbane time) to cheers of congratulations after setting off from Hong Kong, 125 days and 25,000 km earlier.

Morgan set off riding his trusty BMW F800GS motorbike through some of the region’s most beautiful and challenging terrain, dangerous territories and harsh climatic conditions from Hong Kong on 1 March 2011.  He has travelled 25,000 km through Hong Kong, China, Vietnam, Laos, Cambodia, Thailand, Malaysia, Indonesia, Timor-Leste and finally his native Australia, filming a television series to document the journey and bring attention to the work of Wheel2Wheel’s ten charitable partners.

“Wheel2Wheel’s inaugural expedition is now complete, but the journey to raise awareness of important humanitarian issues throughout the region will continue,” expressed Parker.  “I’m overwhelmed at the level of engagement Wheel2Wheel has created throughout Asia-Pacific and I feel humbled by the tens of thousands of supporters who encouraged me to push on.  We will continue to work on behalf of our selected charitable organisations, look forward to the upcoming television series and the next Wheel2Wheel expedition.”

Wheel2Wheel was founded by Morgan as a non-profit organisation to raise awareness and provide financial assistance to ten brilliant, under-recognised charitable organisations throughout Asia and Australia – one in each country of the route.  Wheel2Wheel was born of his desire to find a more active and engaged approach to philanthropy, combined with a personal goal of completing a transcontinental motorcycle adventure.  After committing himself to this endeavour, two years of intensive planning and preparation, and 125 days of intense riding, most of it solo – the dream has become an epic and hard-won reality.

The Wheel2Wheel journey has come with its fair share of harsh realities and tested Parker to the limit.  Travelling roads ranging from new highways, to winding mountain passes, to narrow gravel and dirt trails, to seemingly impassable mud tracks; enduring conditions from freezing cold, to baking heat, to torrential rain; completing complicated border crossings, and torturous ferry crossings; sustaining an exhausting schedule and filming commitments; recovering from hypothermia, heat exhaustion, and even a head-on collision; encountering cultures from the ancient to the modern; touching people young, old, poor, wealthy alike; the expedition delivered all the richness, variety and challenges that it promised – and then some. All in the name of philanthropy and adventure.

To date, the Wheel2Wheel expedition has raised over HKD $1,300,000 (over USD $170,000) through it’s Live The Dream campaign.  Live the Dream is Wheel2Wheel’s call to action to supporters to get involved in philanthropy through fun and unique ways.  A typical example is the Own-a-Km campaign on the Wheel2Wheel website.  Own-a-Km allows friends, supporters and the general public to sponsor one (or several) kilometres of the epic Wheel2Wheel journey for HK$100 (USD $13) per kilometre.  Through this feature alone, Wheel2Wheel has so far raised over HKD $470,000 (almost USD $60,000), 100% of which goes directly to the ten charitable organisations.

The first phase of funds raised is currently being distributed.  Initial projects include building a school in Northern Laos with Child’s Dream; the construction of a Moon Bear Education Centre in Vietnam with Animals Asia; the financing of a Legal Aid Fund with Women’s Aid Organisation in Malaysia; and supporting GECKO to develop an online, environmental education platform targeted for Chinese students.  Full details of all projects across the ten countries will be announced upon finalising the funding commitments.

The inaugural Wheel2Wheel philanthropic adventure has come to a successful completion, but the story is not over.  The Wheel2Wheel team will seek to build on the tremendous engagement it has created among the community of followers, sponsors, donors and the charitable partners throughout Asia and Australia. The charitable mission remains: to continue to raise awareness and provide financial assistance through donations for our ten selected charitable partners.  This will be achieved by:

And finally, we will begin the planning for Wheel2Wheel II – estimated for 2014.

On behalf of the Wheel2Wheel Team we congratulate Morgan on his epic adventure, and say a huge THANK YOU all our sponsors, donors, supporters, friends, fans and charitable partners who made this journey possible.

Wheel2Wheel is still encouraging donations  – www.wheel2wheel.tv/ownakm
The first phase of funds raised is currently being distributed.  Initial projects include building a school in Northern Laos with Child’s Dream; the construction of a Moon Bear Education Centre in Vietnam with Animals Asia; the financing of a Legal Aid Fund with Women’s Aid Organisation in Malaysia; and supporting GECKO to develop an online, environmental education platform targeted for Chinese students.  Full details of all projects across the ten countries will be announced upon finalising the funding commitments.