A few weeks ago the decision was made to use Conti TKC80 tyres for the Wheel2Wheel expedition.  This was the result of some online research, learning from other adventurers and talking to Henry Iu at BMW Motorrad in Hong Kong.

That decision now seems easy, because finding these tyres has become really hard. 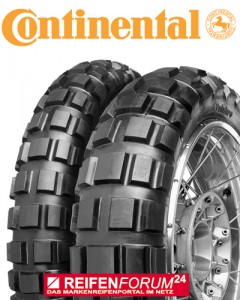 One would think an international tyre supplier like Continental would have distributors all over Asia.  So my conception of us swooping into cities along the route and getting a new set of Conti’s fitted would be realisable.  I naively thought we could simply pre-order them and have them waiting for us to arrive.

The tyres are rated for 1,000 kms to 5,000 kms depending on how roughly you treat them.  Wow, that is a big difference.  For the Wheel2Wheel expedition that could mean we need between four and nineteen sets!  I predictably assumed we would only need four sets for the 20,000 km trip.

So two bikes and four sets each, that’s eight sets of tyres, in other words sixteen actual tyres – can you imagine that!   And that’s the most optimistic scenario.

After exhausting myself trying to source this mountain of rubber all over Asia to no avail, I called my brother Tod in Brisbane – he has a knack of always finding solutions to my problems!  Well, he was straight on to it and immediately found several suppliers in the Brisbane area and within hours was talking bulk discounts.

So the plan now was to buy all sixteen tyres in Brisbane and then Simon and I would personally carry them back to Hong Kong.  Perhaps leaving one set each in Australia, to be sent to Darwin for the final 5,000 kms of the expedition.  I can just see us waiting at the airport baggage carousel in Hong Kong for our 12 tyres to swing by …

Today, I received this email from Tod:

I have one guy looking to see if he can get the numbers together and seems genuinely keen on supporting W2W.
Might be time to consider an alternative tyre as a plan B.”

Welcome to the world of Wheel2Wheel logistics …  This is why undertaking this type of journey takes a year of preparation.  My brother’s enthusiam and perservence is the type of approach that helps get things done.  Since this email he has called the Australian Continential tyres master Agent and continues to seek solutions.

I’m sure with Tod on the job, we’ll find those tyres …