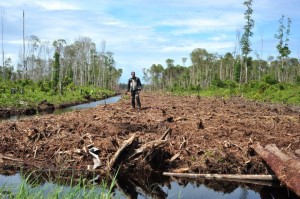 It was great to be able to spend a few days with Morgan and the team here in Aceh and North Sumatra. Apart from anything else, it was a welcome change for me from all the doom and gloom of conservation in Indonesia. Still…..we saw some pretty depressing things in the Tripa swamps too, as the peat swamp forests continue to be cleared in the name of palm oil plantations, destroying the habitat of the Sumatran orangutan and release millions of tonnes of carbon into the air,……a major cause of global warming! I got the impression that Morgan enjoyed it immensely too. 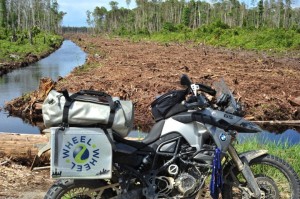 First he managed to team up with around 100 Harley riders from Jakarta for part of the trip, a spectacular sight in itself, but also to drive along some of the most beautiful coastal roads in the whole of Indonesia.  A long stretch of the ride down the west coast of Aceh was also through the most devastated region affected by the 2004 tsunami. for almost a whole day we drove along a coastline on whichnot a single building was left standing after the tsunami struck.

But it was also quite heartwarming to see how people had rebuilt and were once again getting on with their lives. Lake Toba was also quite special. I had been telling the guys just how incredible it is but I don’t think they believed me, until they started heading down on the windy path to Samosir island and I could see the deliberately supressed looks of incredulity at the sheer scale of the place……the site of the biggest volcanic eruption known to have ever occurred on the planet, and one that by all accounts almost wiped out the human race too! I said goodbye to Morgan after 4 days of travelling, and pointed him in the right direction down through the rest of Sumatra to Java and Jakarta. I told him it was a long trip, and to keep an eye out for other Indonesian road users doing amazingly stupid things. True to form, i got a text a few days later informing me it was one of the most hair raising and crazy drives he’s had in his life. Sure enough, Sumatra lives up to its reputation as a genuine place of “adventure”. Like I say, never a dull day here, however frustrating and depressing it can also be……great few days for me and I think equally memorable for Morgan and the team. Keep up the great work!!